The Battle of The Buffet organized by Chennai Mission and CIOSA is Chennai’s curtain raiser to Daan Utsav (Joy of Giving Week). A gala fun filled evening with great food, fantastic music, and the coming together of like-minded people – all for a social cause!

Chefs of leading 5 star hotels and their team cook up a storm (literally) to put together a delightful buffet(Indian and international cuisine) showcasing their culinary talent and throw it open to the people of Chennai, to raise funds for over 60 NGOs across Tamilnadu. The restaurants, the chefs and their teams cook up and serve a feast as their “act of giving”.

Battle of Buffet was held on Saturday, 1 Oct 2016 at Chennai Trade Center, Nandambakkam.  A R Rahman Foundation’s The Sunshine Orchestra was signed up for the musical performance.

About 61 NGOs have expressed interest to participate. 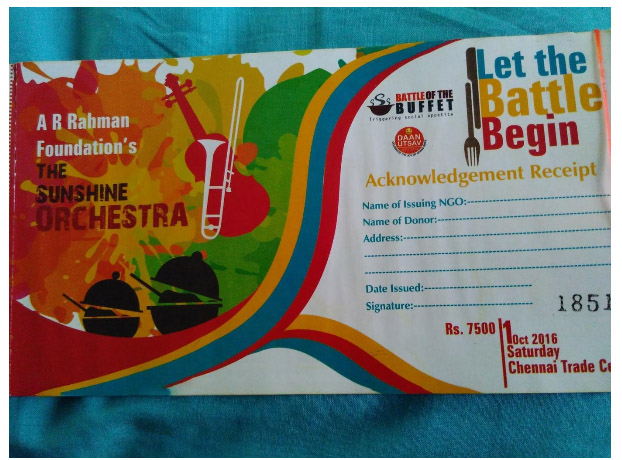