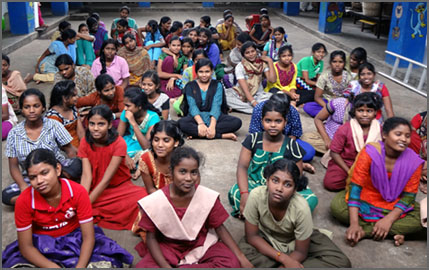 Harijan Sevak Sangh was started by Mahatma Gandhi in 1932 to provide education and house the Harijan children. Sarvodaya girls Hostel is one such home which houses only girls and it has 100 girls staying in Chetpet from the 6th grade to 12th grade. A cleanliness drive was initiated and sustained from June to September by Vaishnavi trust. This was done with reinforcement in the form of talks and followed by action plan implemented.

FOUR THINGS ACHIEVED IN THIS DRIVE:

Most of the time we don't see how much is given to us and we don't feel gratitude. Gratitude is the first step to a clean mind which brings in abundance and happiness into our lives. The girls were divided into groups and group sessions where conducted by Mrs Deepa Jagan. The intention was to help them understand how the mind works and what can we do still it. Being a Vipassana meditator herself the concept of Mini Anapana ( a 10 minute meditation) was introduced to the girls. The Sarvodaya hostel in Chetpet has a huge ground with very old trees flourishing in it. They had ample place to play and enjoy themselves. But there is a mindset that 'I am poor' , 'what can I do I need help myself' and this kind of thinking becomes part of them. The sessions were used to help the girls feel the vast spaces and genuinely feel gratitude to the place which is their home. This was the first step in helping the girls own the place as their own and work for maintaining it with love and gratitude. 2. CLEAN TOILETS Energy is neither created nor destroyed , it just transforms from one form to another. This concept was introduced through a talk about the role of 'excretion'. The importance of maintaining the energy cycle was stressed upon. If the excretion process is not functioning properly then we fall sick. So what we receive has to be used properly and we have to find a way to give back. The doors to the toilets were broken which left only 3 functional toilets for all the 100 girls. The toilet doors were fixed. The girls were regrouped to see how to maintain the toilets henceforth. Roles were assigned to clean the toilets on a daily basis. During this discussion it was discovered that the taps were kept closed in the toilets due to water scarcity. The consequence was the girls had to walk 30 mts to get water to the toilets. So at times enough water was not poured to flush out the toilets. Volunteers donated huge drums which were filled with water near the toilets. New buckets were bought by Vaishnavi trust to help. 3. CLEANING PRIVATE QUARTERS During October 2016 Vaishnavi trust joined hands with the President of Harijan Sevak Sangh Mr Maruthi and other senior members of the trust to clean the place. 5 -10 volunteers from Vaishnavi trust where mobilized to clean the place. The cleanliness drive was kick started with a talk about the need for cleanliness from the senior members of Harijan Sevak Sangh. They elaborated on what Mahatma Gandhi had said about cleanliness. New brooms, mops, dusters where sponsored by Vaishnavi trust and the girls with the volunteers started cleaning the cots, floor and ceiling. Mattresses which were soiled badly were discarded. Store rooms which had lot of unused paper were cleaned. 4. CLEANING CORRIDORS The place the girls sleep in 2 large rooms which are on either side of an open courtyard. 50 girls sleep in each. Initially they would sleep on the floor with mats. During the 2015 floods a good Samaritan donated 50 cots and mattresses to the home. Only 24 cots where able to fit into the 2 large rooms and all the girls were able to fit into them. The rest of the cots and mattresses were stacked up in the walk ways which were blocking the windows to the rooms cutting off the air circulation. Sarvodaya is building a new place and plans to accommodate 200 girls. This was the reason they were holding onto the cots and mattresses. Vaishnavi trust tried to find rental places or free places where the mattresses could be stored till the new building comes up. But the rentals were high and the places refused to give guarantee for the mattresses. Finally Vaishnavi Trust decided to donate the cots to another home 'Anbu Illam', where the cots and mattresses could be used right away. Vaishnavi trust will replace the cots and mattresses once the new building comes up.